In September of 1990, Well No. 1, which reached into the Evangeline Aquifer, was plugged and discontinued after Benzene was discovered during State mandated testing. Dedicated to supplying those we served with the safest services possible, water was purchased from Northwest Harris County MUD No. 15 for the next 2-1/2 years. During that time, the Board worked to secure financing and begin construction on a new water well (Well No. 2), located in Pinecrest Forest Subdivision (at Water Plant No. 1), that goes into the Chicot Aquifer, which is separated from the contamination in the Evangeline aquifer.

With concerns over a District tax rate that had peaked to its highest level in 1995 because the benzene issue and a downturn in the local economy, the Board worked to refinance some existing high interest bonds that were sold in the 1980’s. This resulted in an extremely successful lowering of the rate from $2.90 per $100 property valuation to an impressive $1.50 per $100!

Two years later, due to renewed growth coupled with an increasing demand for water in the area, the District drilled a third water well in Three Lakes East Subdivision (Well No. 3), also within the Chicot Aquifer. And in 2002, in an effort to sustain safe drinking water and wastewater treatment services in the event of long-term weather-related outages, two automatic standby generators were installed at Water Plant No. 1 and the Wastewater Treatment Plant. This is another example of our continued commitment to safety and our proactive approach to the services we provide.

In 2004, an additional water well (Well No. 4), was drilled into the Jasper Aquifer and we expanded the Wastewater Treatment Plant capacity. In 2006, another water well (Well No. 5), was drilled into the Chicot Aquifer and we expanded Remote Water Well No. 4 to become Water Plant No. 2– a plant that also includes automatic standby generator power and an increase in our water storage capacity by 200% — providing improved water pressure regulation and fire-fighting capabilities throughout the District. We have also added additional pressure pumps at Water Plant No. 1 and the District now qualifies for the Texas Superior Water Rating awarded by the TCEQ for superior water quality and service. The District received this recognition on July 11, 2005.

An expansion of the Wastewater Treatment Plant from 0.9 MGD (million gallons per day) to 1.275 MGD began in 2007. Construction was totally contained within the present fenced area. Completion of this Wastewater Treatment Plant expansion occurred in late summer of 2010. A District storage building was completed at the Water Plant No. 1 site. This building houses repair parts/equipment and protects a trailer mounted portable generator for operating Remote Lift Station Pumps during power outages. The trailer mounted generator purchased in 2008 ensures the ability to provide wastewater treatment for our residents in the event of a major storm.

The Board continues to analyze the water needs of all of its customers and through its advanced planning, helps to meet those needs. The Board constructed a new water well (No. 6) in the spring of 2007. Completion of this well and distribution line occurred in the fall of 2010. The efforts helped ensure its customers uninterrupted water service into the future. The Board also secured additional surface water supply from NHCRWA to service customers in the District.

The Board has expanded its Contract Deputy Constable Program to 100% coverage for seven (7) officers. This has permitted better coverage and faster response times as the District continues to grow in size.

With the District now comprised of over 1059 acres of land, the Board has worked tirelessly to keep pace with this growth in our community, and to expand in size and continually upgrade existing plants and equipment all the while continuing to lower the tax rate to what it is today, $0.720 per $100 property valuation. The population of the District is about 6,800 persons larger than the City of Tomball.

The District is currently in sound financial condition with modern, well maintained facilities. The Board continues to work to lower operational costs by improving efficiencies. These efforts will help to offset rising costs of electricity, chemicals and state mandated testing. We are currently the only District in the region to have surplus water for sale. 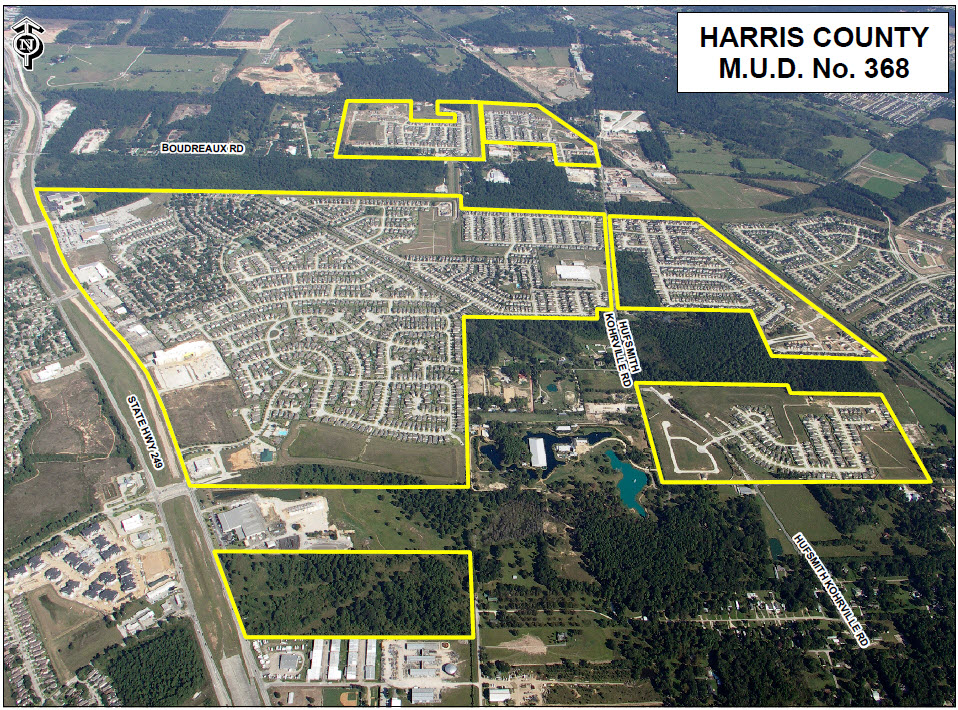